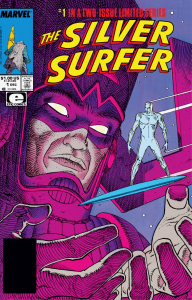 Some of the credit for buying this comic goes to my local comics purveyor, the goateed and ponytailed clerk at Best of Two Worlds (although by the time this book came out, he was working at their second Haight Street location, the name of which escapes me). Unlike his shockingly accurate caricature on The Simpsons, this Comic Book Guy was far less concerned with speculative value, crossover promotions, or even superheroes in general. In fact, a couple years earlier he memorably shoved his pudgy finger onto the cover of a comic I had just dropped onto the counter and announced, “This is toilet paper. Toilet paper.” (I remember the issue to this day — Incredible Hulk #323) Then he convinced me to buy the first issue of Moore & Gibbons’s Watchmen and the latest printing of Miller’s Dark Knight Returns. Full disclosure: I also went home with that crappy Marvel comic.

So by 1988, of course, I was a full-on comics snob, and was therefore a bit surprised that I was being told to buy anything written by Stan Lee. I recognized his importance and, of course, had read a ton of Amazing Spider-Man growing up. But Stan’s florid dialogue and hyperbolic descriptions felt so out of place in a four-color world dominated by the likes of Chris Claremont, Frank Miller, and Alan Moore.

This was something different though. And not just because of the amazing art of Moebius, my first real exposure to the comics legend. Intentionally set apart from the Marvel universe I knew, it was an “Elseworlds” story before that term meant anything, a beautiful, self-contained parable in every sense of the word. Yes, the art is breathtaking and helped foster strong disagreement with Denzel’s Crimson Tide assertion that the “Kirby Silver Surfer is the only true Silver Surfer” (although, to be fair, I wouldn’t give that nod to Moebius either). But Stan’s story and script took me completely by surprise.

There’s something in the character, it’s true, that lends itself to somber melodrama. The lonely, orphaned skyrider, shunned by a world he vows to protect. In this particular story, furthermore, the Surfer is rejected by a society that is caught up in the grips of religious fanaticism. As more and more of the global populace reveres Galactus as a god, Lee’s treatise on the dangers of organized religion becomes clearer. In the Surfer’s words, “Why cannot they realize that the truest faith is faith in oneself? What has made them so desperate to have others show them the way?”

This book captured everything I was feeling at the time: echoing not just the tireless warnings of my father that people lie and manipulate — so be your own man and think your own thoughts; but also the discomfort I felt after years of Catholic schooling that I was being spoonfed indigestible rhetoric, limiting my outlook on the world. I fell in love with this character, this glimmering figure possessed of near-infinite power, and solely dependent on his own self to understand and explore the world. As a kid heading off to college in a few years, I couldn’t have asked for a more potent fucking metaphor. Thanks, Stan.

I have known the heady exaltation of victory. I have known the gnawing pain of defeat. But I shall never cease searching for an oasis of sanity in this desert of madness that men call earth.

In the subsequent years I learned more about the Surfer and his story, including all of the behind-the-scenes drama that rippled in his starry wake. Jack Kirby created the character himself, but Stan adopted him as his own. When it came time to launch the Surfer’s first solo series, Kirby was passed over for art duties in favor of John Buscema. This was an act of betrayal, in Kirby’s mind, that represented the final straw, hastening The King’s departure for DC. I was caught up in the pro-Kirby buzz and artists’ rights movement of the 90’s, and naively assumed (maybe like Denzel) that the true Silver Surfer could only ever emanate from the pencil of Jack Kirby.

Then I read Lee & Buscema’s series. And I read Kirby’s Fantastic Four. The Surfer as he originally appears in that Galactus story is cold and robotic, and despite his sacrifice in the narrative, is visually quite far from the Surfer I had come to see as a chrome-plated avatar of self-awareness.

Eventually Englehart took over a new volume of Silver Surfer (this was during my era) and, although I didn’t know it at the time, Stan had been saddened that another writer was taking the reins on a Norrin Radd book. This was the one character, so the story goes, that Stan wished could only ever have been scripted by him. Oblivious to how much heart and soul Stan had imparted to the Surfer, I followed the character’s exploits with zeal, year after year, decade after decade. Ron Lim became one of my favorite artists, and when I met him at the most recent San Diego Comic Con, I was bound and determined to squeeze myself onto his commission list. Of more recent vintage, Dan Slott and Mike Allred’s series holds sway among the best comics I’ve read in recent years (my kids and many friends have all received trades as gifts for one occasion or another).

Today, I recognize the Lee & Buscema series for the triumph that it is, learning how many college-bound kids of that era felt a similar connection to the Surfer’s internal crises. Count me among the fans who believe this not only the artist’s best work, but Stan Lee’s finest as well. Buscema might well be the definitive Surfer artist, but I don’t think I’m completely out of line to correct that movie quote by saying: Stan Lee Silver Surfer is the only true Silver Surfer. Here’s to you, Stan. Like Norrin in the 80’s, you are no longer held bound to the Earth. Soar on.