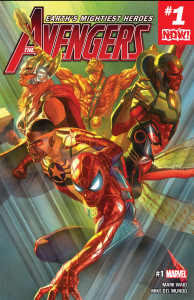 A little over five years ago, few people outside the comic book fan community knew who or what The Avengers were. Since then, the team has starred in one of the highest-grossing movies of all time, and the property is far and away the most profitable superhero film franchise going. I’ve got Black Widow on a Kleenex box. Hawkeye Nerf bows fly off Target shelves. Iron Man and Captain America bobbleheads are given out at Giants games. So when it came time to relaunch the flagship series for Marvel’s latest NOW! initiative, Mark Waid obviously assembled a team that no casual fan would recognize: the sole member with a recognizable movie counterpart is The Vision.

Before even reading a single page of Avengers #1, I applauded the direction. Too many editorial mandates – from both DC and Marvel – have muddied the waters in our monthly titles. I’ve always felt that the comics, the source material, should be informing the greater media output, and not the other way around. Movies and television shows should absolutely develop plots and characters as they see fit; I loved the humanoid Ego in Guardians 2, and I’m onboard for a revised origin story for Adam Warlock. But when an intrigued moviegoer wanders into a comic shop to gaze upon the four-color finery, let him or her marvel at a vast and varied superhero foundation, a tapestry of wonderment that stretches back decades, and not just to the most recent season of Agents of S.H.I.E.L.D.

Mark Waid gets it. This team, even moreso than the all-new all-different assemblage he debuted over a year ago, offers comic book fans both new and old something unique, while simultaneously resonating with historical familiarity. The result is one of the best superhero books on the shelf.

In place of billionaire genius Tony Stark, we get the witty brilliance of the Amazing Spider-Man. This, however, isn’t the nerdy high school kid living with Marisa Tomei. This is the new fabulously wealthy Peter Parker, whose international corporation is responsible for funding and housing (in the Fantastic Four’s old building, no less) the team. That’s not the son of Odin wielding Mjolnir, but Jane Foster, the new (and, some might say, improved) Mighty Thor. Captain America’s shield? Yes. Steve Rogers? No. That black dude with the wings wearing the stars and stripes is none other than Sam Wilson, formerly DBA The Falcon. The Hulk isn’t around (he’s dead, friends), but never fear, because what Hercules lacks in power he more than makes up for in personality. And what about founding members Hank Pym and Janet van Dyne? Their legacy is artfully upheld in the form of the new Wasp, Nadia, who also happens to be Hank’s daughter; and, of course, The Vision, Hank’s “grandson.” I sincerely hope there have been a strong number of casual fans who picked up this first NOW! issue of Avengers and, after some brow-wrinkling incredulity, demanded to know who? and when? and how!?

Rounding out this tribute to Avengers past and present is a villain who, outside of Ultron, may be the one truly definitive Avengers nemesis. Debuting in 1964’s Avengers #8, Kang the Conqueror is a time-traveling despot from the 31st century who has troubled Earth’s Mightiest time and again with chrono-disruptions and pan-millennial armies. His stories have fluctuated between Silver Age simplicity and confusing quantum theory-driven paradoxes. But for “Kang War,” in which the villain attempts to enact revenge on our heroes for daring to kidnap his infant self, Waid combines straightforward superhero action with thought-provoking temporal what-ifs. As fun as Captain America’s plan is, waging war on disparate Kang strongholds across the timeline with an all-star assemblage of Avengers from different eras, the real key to Waid’s comic book success is his ace-in-the-hole, artist Mike del Mundo.

Del Mundo wowed us on two volumes of Weirdworld and numerous covers before throwing in with Totally Awesome Hulk. His incredible painted style, luminescent and dynamic, is unlike anything on the stands right now, and certainly not what you’d expect to see on a focal team book. More to the point, he seems to have been the perfect choice for a storyline that features mindbending trips through the millennia, fantastic landscapes, and the twisted origins of Kang. And as good as del Mundo’s storytelling is, being one of the few artists to recognize the importance of the entire artistic package, from layouts to word placement, issue #4 in this arc might be the most expressive. This issue, told entirely in a series of splash panels, sets up the final confrontation between Kang and the Avengers by retelling the Conqueror’s story from his own perspective. 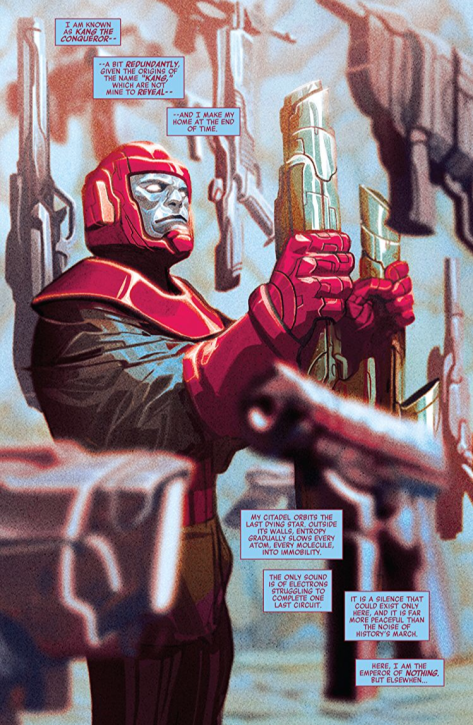 The notion of time in the comics medium has always been something that has fascinated me. Of the three visual storytelling media – including film and live theater – comics is the one among them that puts control of the passage of time in the hands and eyes of the audience. You can mow through an entire comic in minute if you so choose, or you can linger over a page for an afternoon. You can even disrupt conventional chronology and move back and forth through a book at will, framing the story as you desire. In this new launch of Avengers, Waid has given us a story that feeds on that ability, showcasing a villain whose premise depends upon it, and partnering with an artist who embraces it.