At the EarthFair Festival in San Diego this past weekend, I was struck by the logo for the San Diego Pagan Pride organization.  All these pagan religions united against discrimination and prejudice, reminding us all the while that crosses and Stars of David are fine as religious symbols, but if you’re really looking for iconography to rally behind, consider the ankh or… the hammer of Thor!

Which then made me wonder whether or not the half-dozen or so people in San Diego who actually claim to be adherents to the Norse faith had any problem with Marvel Studios’ upcoming summer blockbuster. Was Thor being seen as a trivialization of their beliefs? An insulting depiction of their deity dealing with the modern world like, I don’t know… The Book of Mormon or something?  Or was this going to be their Passion of the Christ?  Would Teutonic neopaganists start losing their shit in theaters nationwide (starting at midnight on May 6, naturally) watching their God of Thunder suffer at the hands of the divinely crafted Destroyer armor? END_OF_DOCUMENT_TOKEN_TO_BE_REPLACED 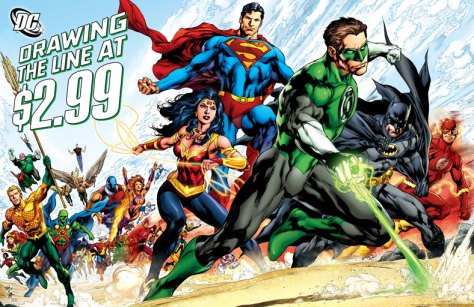 “This announcement reaffirms DC Comics’ commitment to both our core fans and to comic book store retailers,” said Jim Lee, DC Comics Co-Publisher. “For the long term health of the industry, we are willing to take a financial risk so that readers who love our medium do not abandon the art form.” END_OF_DOCUMENT_TOKEN_TO_BE_REPLACED

Originally published in Justifications on December 10, 2007:

This past Saturday night I was huddled near an electric spaceheater in a makeshift room of a live/work loft in the Vulcan Studios community in Oakland, just off San Leandro. Charlie was clinging to a vanishing pang of nostalgia, something he remembered loving about being a boy… something about growing up and the way things were. Unable to properly recollect the memory, he resorted to a description of a typical day growing up with two brothers and a sister: wake up, fight, read comics, fight… “it was so great.”

He asked me if I read comics growing up. “I still do.”

My love affair with comics is similarly rooted in those carefree days of youth. Both of my parents worked when I was growing up, so, during my elementary school years, my grandfather would often pick me up after school and take me to his house in Cow Hollow. At least once a week we would walk down to Chestnut Street – a place decades removed from today’s trendy nightspots and Apple stores – and wander into Jack’s, a magazine and tobacco store between Scott and Pierce. Nonno would set himself up in the back, elbows on the counter, and talk to whom I can only imagine was Jack himself, leaving me at the entryway of the store to peruse the comics racks. END_OF_DOCUMENT_TOKEN_TO_BE_REPLACED

The Institute’s comics department may receive far less attention than its audio/visual brethren, but as department chair I will continue to extol the virtues of the medium to any and all mildly interested parties. When compared alongside music and film, comics does require the most human interaction, particularly in the sharing of discoveries. If Professor Flores was particularly excited about a movie, you might add it to your Netflix queue. If Dr. Howell was adding an LP to the fourth quarter syllabus, you might download it wirelessly to your iPhone. But if I want you to read the new Chris Ware book, you’re going to have to set foot in a bookstore, or, god forbid, a comics store. The twenty-first century has not devised an effective means of disseminating or reading comics digitally. Not to say it won’t happen… but chances are, for the foreseeable future, your best bet is to borrow my copy. And maybe we’ll get coffee too.

It seems rather fitting that the finest graphic offerings of 2010 are all achievements in comics storytelling and craft. It’s hard to argue that comics can accomplish things that other media cannot, especially when comics-in-adaptation are all the rage these days. Scott Pilgrim was one of the best movies of the year; The Walking Dead is a new AMC hit; and Disney’s new Marvel properties are toy shelf gold. These five books, however, need to be appreciated in the form the artists intended.

The Top 5 Comics of 2010
END_OF_DOCUMENT_TOKEN_TO_BE_REPLACED