The Sweet Sixteen round of Idle Time’s 2015 Tune Tournament opens in Scandinavia. Not surprisingly, all four songs vying for regional supremacy hail from the same Nordic epicenter of pop perfection. Yes, it helped that two-thirds of the bracket was Swedish. And there might have been a slight bias in the seeding. 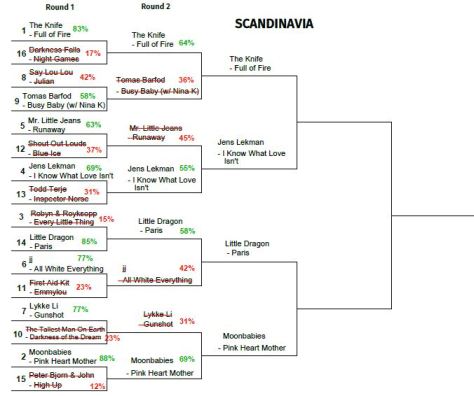 Jens Lekman’s lovesick guitar has held off more upbeat entries from consecutive Norwegian artists. “I Know What Love Isn’t” snuck by Todd Terje’s “Inspector Norse” in the first round and then outlasted Mr. Little Jeans’s “Runaway” in another close second-round match. Now things gets serious, however, as he faces off against the region’s top seed: “Full of Fire” by The Knife, who made short work of Danish Tomas Barfod (despite the Swedish vocals of Nina K).

Little Dragon had a lot of momentum coming out of their first-round blowout over Robyn & Röyksopp, and they needed every bit of it to take down jj’s “All White Everything.” They move on to face Moonbabies and “Pink Heart Mother,” who boasted the biggest second-round win margin in the Scandinavia bracket, claiming 69% of the votes in the matchup with Lykke Li.