This began as another in a long string of Sweden vs. Australia debates. And even though we’re older, wiser, and less prone to antagonistic accusations of shit in each other’s ears, we still like arguing about music. We also still love making lists for the sake of making lists. So… inspired in part by our old Rock ‘n Roll Roulette convocations and in part by the furor of NCAA basketball tournaments, we’re happy to kick off our first Idle Time Tune Tournament! 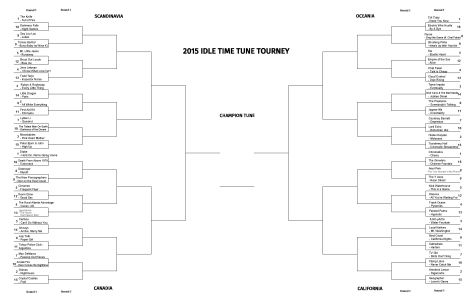 The format — such as it is, finalized over extra innings of pizza and cheap beer — became as follows. Sixteen favorite songs from four distinct regions. Scandinavia and Oceania to begin, of course. We added California as the third region because we love our home state. We added Canada because, back when we started Idle Time in ’02, it was the preeminent region challenging the U.S. of A for our pop music attention. Also (and maybe more importantly), we could call it “Canadia” and retain the “-ia” motif.

Songs needed to have been released within the last five years. This rule was fairly arbitrary and I’ll leave it at that. But our hope is that we can play around with other places over the next few years and, when we come back to these inaugural regions in the future, we’ll have several years of singles to choose from.

Tunes were seeded by myself, MH, RF, and WH. So calling anything a “favorite” in any given region means very little. Ultimately, winners of each matchup will be determined by the online polls posted here. Whichever song gets a higher percentage of votes moves on to the next round until there is one triumphant song.

And what of that Champion Tune? What is the significance, beyond the esteem and posterity that comes from winning a virtual championship on a website that is viewed by dozens of people annually? The song will be honored in different forms by different Idle Timers…

(*Some or most of these honors are unconfirmed. And my IFTTT thing only happens if I can figure out how to do all of that.)

Ladies and gentlemen, we have a winner.

64 songs entered the tournament, and then only TWO remained! San Francisco’s Y Axes proudly carry the California torch into the Tournament Final against the Scandinavian region winner, Sweden’s Moonbabies! Click the link below to see the results.

The Y Axes vs. Moonbabies

Click the links below to view the Elite Eight matchups and their results.

See the links below for the Sweet Sixteen results:

And in case you want to check out the Round of 32 matchup posts and results:

You can also still check out the introductory posts from the first round by following the links below.

And, finally, click here to see the updated bracket.